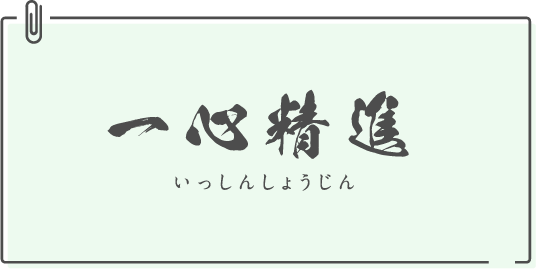 “一心精進” is a phrase that describes the philosophy of students learning at Osaka Japanese Language Academy(OJA). You may feel depressed after studying everyday, however you can feel the improvements as well. Even if you cannot achieve the desired out come, not only Japanese language, but you can also improve yourself, by studying at Osaka Japanese Language Academy (OJA). The continuation of your small daily effort makes “一心精進”.

2001
Helped to manage and operate an accounting firm, director of NAKKU Co,Ltd.

My mission is to contribute to international cooperation and create the friendly relationship in Asia.

Make a contribution to the local, Japan, and the world is my goal.

Our school is located at Hiranoku area of Osaka city, this area has many Small and Medium-sized enterprises. I still have other companies. During the development in the new era, I deeply feel that technology development, new type labor force and Market development are very important. Therefore, I believe the contact between Japan and other countries in Asian that led by china and Korea is essential. Not only between the government, but also the contact between citizens has same significance which to push the relationship between cities, development of Japan or the whole world. To create the language school, I hope to keep the Asia as the centre to recruit the talent from different countries because they could study the advanced knowledge and technology for achieving the globalization in the future. As the saying goes “give you a hand do you’re a favor”, I will spare no efforts on contributing to this course. Because of the same aim, Mr. CHIKA KATSUHIKO, my supervisor, the professor from Osaka City University, support the high level educational university for oversea student. To supports the area or the country development.